The Immediate Past PGP, Bro David Feather ROH; along with the Assistant PG Secretary, Bro Ron Gayer KOM, present a cheque for £1000 to ‘Shore Leave Haslar’ from the 2021 appeal. 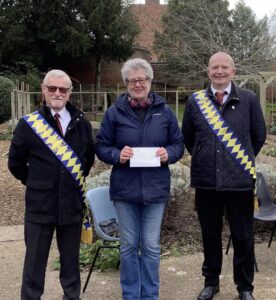 Please see below the Transcript of an email from John Boynton’s son, Wes. Sent to Ged.
Hello
Had a call from one of the stroke doctors this afternoon.
My dad’s stroke was what they call an acute infarction, (essentially a blood clot). It occurred in the left occipital part of the brain, which affects the right hand side of vision.
Can’t see on the right hand side of both eyes. Has full vision on left hand side. Technically blind on his right side.
Physio can help to train the brain to compensate but as he’s still confused he’s not really able to understand he’s right side blind.
Memory may improve over time but vision probably won’t.
(Place something on his left hand side and he can see it. Move it to the right & he can’t see it. Thinks the doctor is playing a trick on him).
At least we know what’s going on now and he can be treated accordingly. Just going to take time.
That’s all for now.
Will keep you posted.
X Wes

Following the Management Meeting, This Morning Sunday 13th September, We are pleased to announce The RAOB Club Gosport will remain open for all Lodges and The Glades to Meet.

Government Guidelines and Social Distancing will still be observed as per the current Risk Assessment, As a Covid Secure Venue.

As of Monday 14th September, ALL MEMBERS and VISTORS, are required to sign in on a Daily sheet, located on the table in the bar area, We as everyone to bring their own pen to sign in, this is Now required under Law, (As of 00.01 14th September) You will need to Print your Name, Sign Your Name and add your Telephone Number, The RAOB Club has to keep these for 21 days when it will be Shredded. This is under the Track and Trace Guidelines.

Please Help Us to Help you stay safe with in the Confines of the RAOB Club Gosport, by using the Hand Sanitiser at the Entrance, in The Lodge Room Downstairs and Upstairs and in each of the Toilets, Use the Antibacterial Wipes, to wipe down any surfaces you touch, especially after using the Toilets. 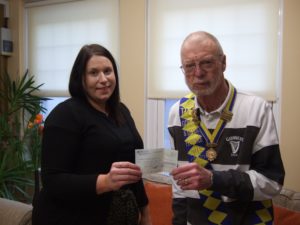 Bro John Lear ROH, was pleased to present the cheque, on behalf of the Province, at the behest of Bro. John Cryan KoM as he was unable to do so personally. There was a 24 hour Lodge, in the Oxford Province, last year, which was attended by members of Gosport & District Province.
The Brethren attending were asked to nominate charities who would benefit, from the money raised. A draw was made and the Harbour Cancer Support Centre was one of the ones chosen. This organisation is very close to the hearts of Gosport Buffs, having been supported by us for a number of years.
The Group have asked Bro John to convey their heartfelt thanks to the members of the Province who made this donation possible.

Sad to announce the recent passing of Bro ‘Lionel’ Jeff Jeffery ROH to the Grand Lodge above.

Informed by the Family that the Funeral will be on Friday 10th January 2020 13.45 at Portchester Crematorium South Chapel. The family have Requested a Full Buffs Service, Followed by a Celebration of Life at The RAOB Club, Stoke Road, Gosport.

Pictures from the recent Barbecue at The Queens Head are here, credit Sue.
Click Here 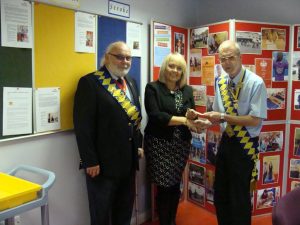 The Provincial Grand Primo 2015, Bro John Lear ROH, together with the DPGP, Bro Ged Hallam KOM, present a cheque for £100, from the 2015 project to Yvonne Campbell of the Rainbow Centre, 7 October 2015.

Further to The PGP’s (Bro John Lear ROH) walk from Walpole Park to Fareham & back, Bro John shall be trawling the lodges for their sponsor forms over the coming weeks.  Paypal donations can be made to jblear@tiscali.co.uk 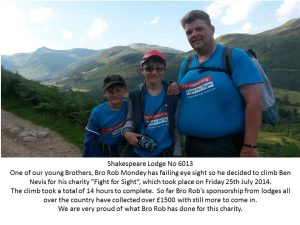 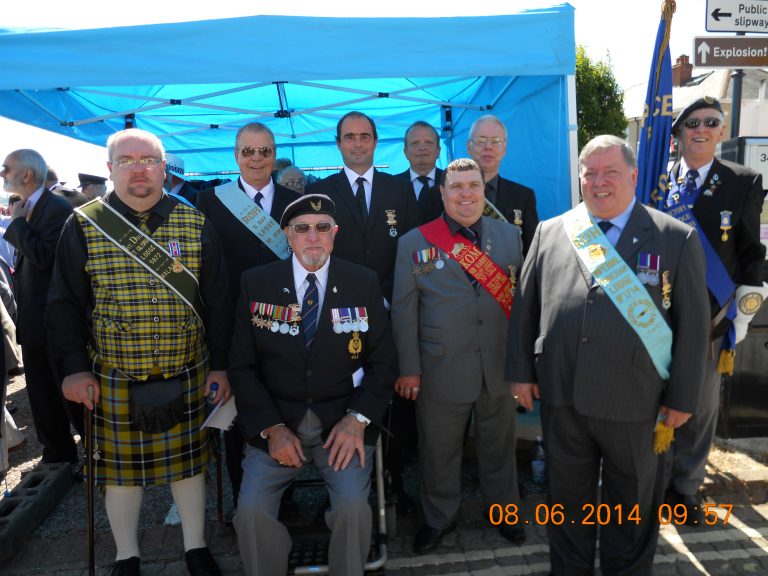 The hottest day of the year so far, and at 10.15 am a number of veterans, members of the Armed Forces, cadets and, last, but not least, a small contingent from the Royal Antediluvian Order of Buffaloes led by a cadet band marched a short distance to the Recreation Ground at Hardway, Gosport to take part in a Service to commemorate the events of 6th June1944.  The Service was also attended by the Lord Lieutenant of Hampshire, Dame Mary Fagan DCVO, JP, RNR (Hon V. Adm.), the Mayor of Gosport, Councillor Wayne Ronayne and representatives of the three services

The location was highly appropriate.  Of just over 200 Landing Ships (Tank) which took part in the landings, more than 190 were based in Gosport.  Their duties were to take troops and equipment over to Normandy and return with the injured and prisoners of war. Two veterans of D Day were present, one speaking of the Landing Ship (Tank) operations and the other of the weather, which was crucial in General Eisenhower’s decision to invade.

The Province was represented by the Standard Bearer, Bro Dave Foster KOM of the Victory Lodge, Bro Jesse James ROH, Bro Dennis Wellman ROH, Bro Dave Coote ROH, Bro Andy Ferguson KOM, Bro Paul Wellman and Bro Carl Smith, all of the D Day Lodge No. 8138, and Bro Pastie Hoskyns & Bro Ron Gayer CP.  Bro Dave’s ability to remain upright when some around him were fainting from the heat is to be admired.  Fortunately all the brethren of the Order present remained on their feet.

Bro Dave Coote ROH was asked to lay the wreath on behalf of the Province.  He was accompanied to the memorial (newly dedicated and made in Caen marble) by Bro Carl Smith, the newest member of the D Day Lodge. 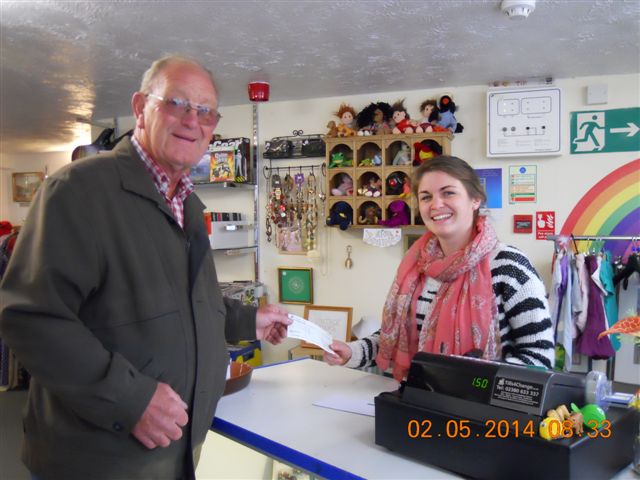 The picture above shows Bro. Clive Searle ROH handing a cheque for £100 to a representative of the Rainbow Trust in Fareham as a donation from the D Day Lodge in recognition of the work they carry out in the community and their continuing need for funding.
The picture was taken by Bro Dave Coote ROH, City Secretary.