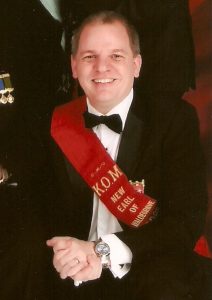 Firstly – a Big Thank-you, on behalf of the province to Bro Gus for the marvellous achievement of 2013.  I would also like to thank the brethren of the province for electing me to serve as your Provincial Grand Primo for 2014 – I only hope that I can do you all justice.

If I can be forgiven for emulating a hero of mine, Sir Paul McCartney, who said in 1969 “Follow that?  You know it can’t be done”.  He was of course referring to the split of the Beatles and suggesting that he could only dream of ever being successful again; though he did go on to do some pretty decent stuff, as well as some pretty dire stuff too.  So it is with me now, I just hope that I can continue the legacy I have been left and try to build on the good work that Bro Gus has done in 2013.

I was approached by several of the brethren and sisters during recent months with ideas that they are keen on, either as individuals or something that their minor lodge is supporting.  I can tell you all now that each of them will get a portion of the fund at the end of the year when I stand before you having completed a year in office.

2. The Joe Glover Trust – a children’s cancer charity currently being supported by the Lion Lodge on the Isle of Wight.

3. The National Coastwatch Institution (NCI) is a voluntary organisation set up in 1994 to restore a visual watch along UK shores after many small Coastguard stations closed and relies solely upon voluntary contributions.  Suggested by Bro Richard Simpson of the Shakespeare lodge.

4. The Wessex Holiday Scheme, founded by members of the RAOB, the aims of the charity are to provide much needed holidays and trips for families and children less fortunate living in the Wessex area.

Finally – and my cause of choice, a cause that is very close to my families heart – 5. The Neonatal Special Care Baby Unit at Queen Alexander Hospital in Portsmouth.  This unit provides care for New-Born Babies, usually very premature, and their families.  This cause is particularly close to the hearts of my wife and I, as all 3 of our offspring were guests of the Neonatal Unit, albeit when it was housed at St. Mary’s, as they were 6, 8 and 10 weeks early respectively.  All three of our children were particularly poorly and were cared for at this unit. At the time, my wife and I were not in a position to say Thank-you to them properly.  I hope that at the end of the year, I will have the pleasure of presenting them with a healthy donation to assist them with their good work.

Many thanks to you all in anticipation
Bro Dave; KOM.

Now that my year of office is over; I would like to take this opportunity to thank you all for the support and encouragement that has been afforded to me during the year.  It is most heart-warming to know that there are so many good people among you who have helped to make it special for me and I shall always be grateful.

Whether as individuals, or as lodges, you have helped to contribute to the goals and aspirations of the province and this makes me proud to have been elected, by you, to head this for 2014.

You may recall that I said ‘Yes’ to all those brethren and lodges who approached me before my year of office with their suggestions for who might benefit from the appeal for 2014.  It does mean that the money will be spread more thinly, but it also means that the money is going where we all wanted it to go.

You may also recall that, much to the disgust of the Trustees, I tried to implement a ‘Blanket Yes’ to all those who wanted to raise funds for other causes not connected with our order, yet still worthy of our attention.  I hope that all these good causes have benefitted from your hard work and generosity.

As well as raising significant amounts of money for other projects during 2014, we (YOU) have amassed £3,451:84 for our appeal.  You should all be very proud of this achievement.

Early last year, we sent a donation of £100 to the Rainbow Centre in Fareham when they were in trouble.  I’m pleased to say that they survived and continue to provide their services.

I have asked that £500 be sent to the Joe Glover Trust, a children’s cancer charity which was supported by the Lion Lodge.

Bro Lionel and Sister Judy Jeffery received a cheque for £500 on behalf of the Wessex Holiday Scheme, a charity founded by our own order which provides holidays for those less fortunate living in the Wessex area.

Lorna Burton received a cheque for £500 on behalf of ‘Sam’s Haven’.  This charity provides short holidays for families of life threatening or terminally ill children in our local area.

Bro Richard Simpson received a cheque for £500 on behalf of the National Coastwatch Institution, a voluntary organisation set up in 1994 to restore a visual watch along UK shores after many small Coastguard stations closed and relies solely upon voluntary contributions.

Lastly, and my cause of choice, Lorraine Blackburn and her colleague Lynn Croombs accepted our cheque for £1,350 on behalf of the Iccle Pickles, the Neonatal Intensive Care Baby Unit at QA hospital. 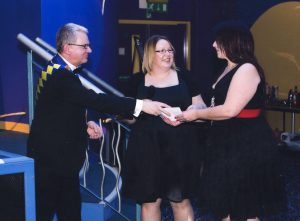 I consider it an absolute privilege to have served you for the year and wish my successor, Bro John Lear ROH, all the very best for his year of office.